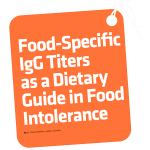 The reasons
of food intolerance?

The mechanisms of IgG-mediated food intolerance
are immune-complex based. Partially digested food
components pass into the bloodstream, inducing
the production of IgG antibodies and the formation of
antigenantibody complexes. If the immune complexes
are not sufficiently cleared, they are deposited
in tissues, causing inflammation.

The reasons of food intolerance?

The mechanisms of IgG-mediated food intolerance are immune-complex based. Partially digested food components pass into the bloodstream, inducing the production of IgG antibodies and the formation of antigenantibody complexes. If the immune complexes are not sufficiently cleared, they are deposited in tissues, causing inflammation.

Symptoms are not life-threatening and can be cured
eliminating the intolerable food from the diet – find out what food!

Symptoms are not life-threatening and can be cured eliminating the intolerable food from the diet – find out what food!

Chronic unspecifc symptoms such as diarrhoea, constipation, bloating, nausea, migraine, asthma, eczema, arthritis or fatigue can have many diﬀerent causes, including reactions to ingested food. It is often difcult to pinpoint the trigger of such symptoms and applying a routine exclusion diet is not always useful due to widely diﬀering patient responses. Testing for antibodies of class IgG against diﬀerent foods and food additives may help to establish if an immune-mediated food intolerance is behind the health problems. If high concentrations of IgG antibodies against a particular food are identifed, elimination of the oﬀending substance from the diet may help to relieve symptoms. Thus, a comprehensive IgG analysis can help to tailor an individualised approach to diet management.

Food intolerance diﬀers from immediatetype, IgE-mediated food allergy (type 1 allergy) in that reactions are typically delayed and symptoms tend to be more generalised and chronic. In a classic IgE-mediated allergic reaction, consumption of an oﬀending food results in a rapid release of histamine and immediate symptoms of tingling mouth, hives and swelling of the lips, face, tongue and throat. Severe allergic reactions (anaphylaxis) can lead to acute breathing problems and low blood pressure and can be life-threatening. In IgG-mediated food intolerance, on the other hand, onset of symptoms ranges from several hours to days after intake of the food. The most frequent symptoms are diarrhoea, constipation, bloating, nausea, upset stomach, irritable colon, migraine, asthma, joint disorders, lack of concentration, skin disorders and weight gain or loss.

The mechanisms of IgG-mediated food intolerance are immune-complex based. Partially digested food components pass into the bloodstream, inducing the production of IgG antibodies and the formation of antigenantibody complexes. If the immune complexes are not sufciently cleared, they are deposited in tissues, causing inﬂammation. Patients with a compromised immune system or an increased permeability of the intestinal wall, so-called leaky gut syndrome, are particularly susceptible to these inﬂammatory reactions. A leaky gut can be caused by diet-related hyperacidity of the gut ﬂora, medication, infections, preservatives, alcohol, nicotine or stress or further factors. The immune
complexes are preferentially deposited in tissue that is already damaged or inﬂamed due to e.g. disease, infection or environmental toxins, resulting in augmentation of the inﬂammation and chronic symptoms.

To relieve symptoms, an elimination diet for a set period of time is usually recommended. The foods for which high IgG antibody concentrations were measured are excluded from the patient’s diet. Improving the gut ﬂora by therapeutic measures can also be considered to reduce or prevent the permeability of the intestinal wall to food antigens.

IgG antibodies have various functions, such as neutralisation of antigens, activation of the complement cascade, ﬂagging of antigens for destruction (oponisation) and phagocyte binding. However, the four diﬀerent subclasses of IgG play diﬀerent roles (Table 1). Due to their strong oponisation and complement activation properties, IgG1 and IgG3 and to a lesser extent IgG2 are pro-inﬂammatory. IgG4 on the other hand has protective, anti-inﬂammatory properties. IgG4 plays a defensive role in type I allergy, acting as an antagonist of IgE. It induces the release of histamine, although to a much lesser extent than IgE. Therefore, IgG4 antibodies may lead to allergy symptoms particularly in histamine-intolerant patients. However, in chronic inﬂammatory processes, only the subclasses IgG1, IgG2 and IgG3 are relevant. Since IgG4 antibodies make up only a small proportion of all IgG, testing for total IgG is sufcient to detect clinical relevant titers of proinﬂammatory IgG1, IgG2, and IgG3 antibodies..

Migraines have a complex etiology, but it is known that food can play a role in inducing or aggravating attacks. Already in the 1930s the benefts of an elimination diet were demonstrated. In recent studies, elimination diets based on IgG levels have been shown to have signifcant positive eﬀects, such as reduction of the number of headache days, attack count or duration and severity of migraines. A further study revealed signifcant diﬀerences in the number of positive results for IgG to foods between 56 migraine suﬀerers and 56 controls, and elimination diets successfully controlled the migraines of these patients without the need for medication.

Food intolerance has been known for many decades to be a causative factor for developing arthritis. In a study of 22 patients with rheumatoid arthritis undertaking an elimination diet, 91% experienced an improvement of symptoms. All but one of these patients suﬀered a deterioration of their health status when the reactive foods were reintroduced into their diet.

Irritable bowel syndrome (IBS) is the most common functional gastrointestinal disorder with a reported prevalence in the general population of 12 to 22%. The disease is poorly understood, but food intolerance is a major factor in its pathogenesis. Specifc foods can provoke symptoms of IBS, while patients treated with dietary exclusion frequently show symptomatic improvement. In a study on 150 IBS patients, an elimination diet based on raised IgG antibodies resulted in a 26% improvement in the symptom score compared to a sham diet, while relaxation of the diet led to a 24% deterioration. In a further study, 20 IBS patients showed signifcant improvement after food elimination and rotation diet based on serum IgG measurements.

A retrospective study on 112 patients with inﬂammatory bowel diseases (IBD) (79 with Crohn’s disease and 33 with ulcerative colitis) and 266 healthy individuals showed that patients with inﬂammatory bowel diseases exhibit a high prevalence of antibodies of class IgG against certain foods and that qFIGURE 1: Examples of test parameters in EUROLINE food profles this can be used to establish an elimination diet. Further studies have similarly shown higher levels of food IgG antibodies (e.g. against yeast and processed cheese) in Crohn’s patients than in healthy controls, and demonstrated that nutritional intervention based on circulating IgG antibodies against food antigens can improve symptoms.

Increased levels of IgG antibodies against foods or food additives have also been observed in asthma and atopic dermatitis. For example, in 125 patients with beef allergy manifesting with asthma, dermatitis or gastrointestinal disorders, beef-specifc IgG and also IgA were signifcantly detected alongside and sometimes in the absence of specifc IgE. An elimination diet ameliorated the symptoms in all of the allergic patients. In another study, signifcantly elevated levels of IgE and IgG were found in a relatively high proportion of patients with atopic dermatitis compared to controls.

The etiology of autism is not well understood, but dietary restrictions are benefcial and a prerequisite to beneft from other interventions. The main foods for exclusion are milk and dairy products, wheat and other gluten sources, sugar, chocolate, preservatives and food colouring. Individualised IgG and IgE testing can identify other troublesome foods. In a study of 36 infantile autistic patients, high levels of antibodies including IgG against milk proteins were found compared to control children. Behavioural symptoms improved on an elimination diet, indicating a possible relationship between food allergy and autism.

The diagnostic value of IgG antibody detection for the diagnosis of food intolerance is controversially discussed. Nevertheless, diﬀerent studies with up to several thousand patient samples have come to the conclusion that the determination of the antibody titer can be a useful tool for the identifcation of food intolerances and for targeted patient therapy. Generally, it could be shown that elimination of those foods against which strong antibody reactions were measured helped to improve symptoms or to promote complete recovery in a statistically signifcant number of patients. A large internet-based study on the diagnostic beneft and clinical relevance of IgG antibodies as a marker qTABLE 1: Properties and abundance of diﬀerent IgG subclasses of food intolerance concluded that IgG determination provides a clinically useful basis for establishing an elimination diet.

IgG antibodies against diﬀerent food and food additives can be easily determined by immunoassay. Immunoblots are particular useful for this application as they allow multiparameter analysis of hundreds of diﬀerent parameters in parallel, providing an extremely wide-ranging screening (Figure 1). This is especially important in food intolerance, as symptoms tend to be delayed or chronic and may be difcult to link with consumption of a particular food.

Total IgG against 108 or 216 foods and food additives can be analysed simultaneously with a new range of immunoblot profles based on established EUROLINE technology. The foods represented on the strips are divided into categories, encompassing gluten-containing cereals, gluten-free cereals and alternative foods, meats, dairy and egg, fruits, herbs and spices, nuts and seeds, vegetables, legumes, salads, mushrooms, fsh and seafood, and other foodstuﬀs such as yeasts, honey, coﬀee and black tea. Only small volumes of patient serum are required for the analysis, just 40 µl for 108 results. By analysing 22 patient samples in one run, 2,376 single results can be obtained in just 4.5 hours. Results are evaluated semiquantitatively using four calibrators corresponding to the WHO reference serum 1st IRP 67/86. To increase productivity further the entire procedure, from sample identifcation and incubation to evaluation and archiving of results, can be fully automated e.g. on the EUROBlotOne device with EUROLineScan software.

The determination of IgG antibodies against food and food additives can contribute to the diagnostic workup for patients with chronic food-related health problems. Although the link between food-specifc IgG antibodies and chronic inﬂammatory processes has not yet been frmly established, many studies have demonstrated an association between food IgG antibodies and diﬀerent diseases, and shown that elimination diets based on IgG reactions can help to relieve symptoms. Thus, patients with unspecifc gastrointestinal and other symptoms which cannot be attributed to any known cause may beneft from a comprehensive IgG analysis and a corresponding elimination diet. As with classic IgE allergy tests, IgG results should always be interpreted in the context of clinical observations. Further studies should help to clarify the role of food-specifc IgG antibodies in poor gut health.

You can choose testing of 54, 108 or 216 food products for food intolerance

You can choose testing of 54, 108 or 216 food products for food intolerance

The test can be performed in one of these laboratories

For information on test costs, contact the laboratory of your choice

The test can be performed in one of these laboratories

For information on test costs, contact the laboratory of your choice